This seems like a hard task, but the main textbook of the course does in my view pass these criteria! It is a Swedish book called Trädgården jorden – Från fångstsamhälle till global kapitalism och därefter by Gunnar Rundgren (2010). And, good news, since a few months it is also available in English: Garden Earth – From Hunter and Gatherers to Global Capitalism and Thereafter (link to Gunnar’s webpage, book description and blogg). 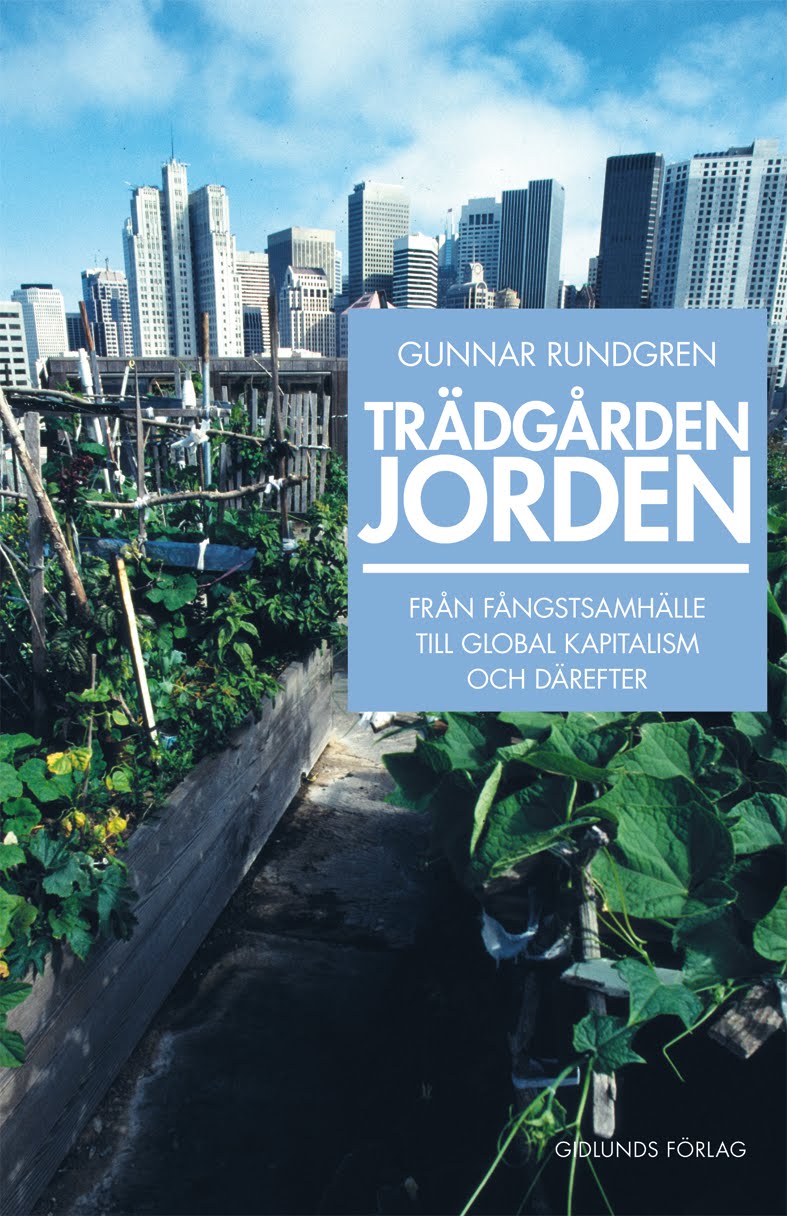 The book is divided into four sections where the first is a historical view on how some civilizations has evolved and some has collapsed with references to e.g. Jared Diamond. Diamond’s focus is however mostly on geographical factors, thus making it somewhat deterministic. Rundgren weaves together the technological perspective with the development of the economic and political systems and our view on us and nature. The second section is an overview of the ecological challenges we are facing, such as loss of biodiversity, resources, energy and global warming, toxic chemical waste, farming, population growth and migration etc. The third is about the functioning of our society and ourselves and the different forms of capital: natural, human, social, manufactured and financial, and the relation between them, and issues of global justice such as distribution of resources. 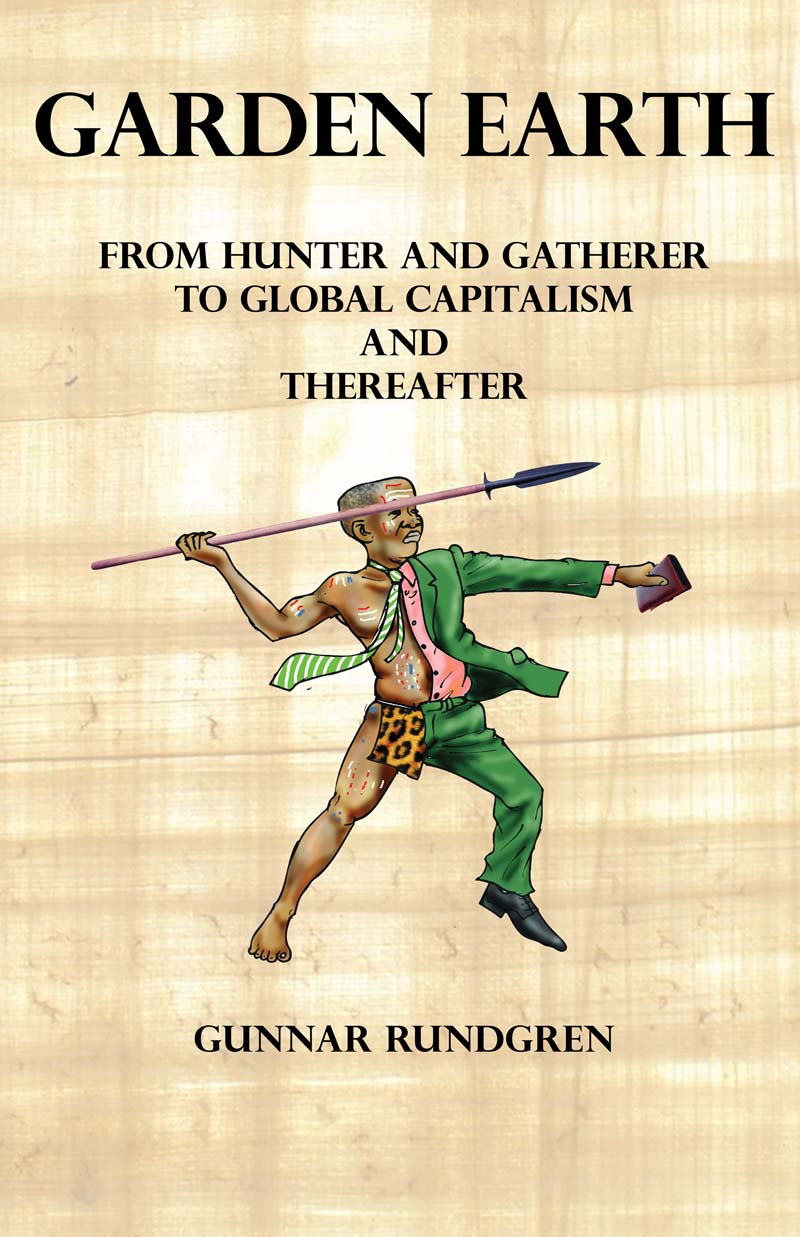 The title suggests that the way forward to tackle the challenges of sustainability cannot be found within the current reign of capitalism and market economy, but rather beyond them. In the final section Rundgren presents a broad critique towards the current global capitalist economy in that it is not the solution and that something beyond is needed, but only after first having presented the historical background to why we have capitalism and a market economy. Only by understanding why we have it we can move forward in our development, if we just consider it evil and reject it per se we only get another system that probably will be plagued with all problems that capitalism actually solved for us.

Before the industrial revolution people were typically farmers and only a small surplus from what was produced at the farms were sold on markets. Workers were not free to move, e.g. loathing was typically prohibited. When the production at the farm was mechanized it required capital for purchase and the production therefore needs to be increased, you need a secure access to labor and to resources. Now a big market for goods was motivated, a market for labor (that in great deal moved into the cities) and a market for land were created. And it became possible to make money on trade itself without producing anything by oneself. Today this capitalism, symbolized by Wall Street, has grown to disturbingly large portions in relation to the value it produces to society, one can safely say.

Capitalism and the market economy are systems that have solved some problems and contributed to our socio-techno-economic-political development (and psychological I would argue – Something I would like to add to the discussion is obviously a developmental psychological). But it is a system that is inherently designed to grow – and now that we have hit this planet’s limits we see the problem in growing dept and an accelerating depletion of natural resources. As it continues to grow, more and more of our resources as well as services and existential necessities will be priced and traded over an open market.

This development is particularly discussed around the issue of ecosystem services, such as nature’s ability to provide us with services such as the production of food, energy and oxygen and carbon storage by means of photosynthesis. Is it better to put a price tag on that than letting it remain free from economic value as it is now? Rundgren discusses solutions within the current economic system, but emphasizes the need for some sort of transformation. One conclusion is that the commoditization of nature and relations undermines the ecological and social capital. Capitalism will continue to grow to eat its own basis, which will eventually kill itself. Thus, the economic system needs to be subordinated the ecological, not the reverse, and it also need to be subordinated the social system.

Although emphasizing a holistic view on our problems, Rundgren’s main concern is the issue of food production, his background is from ecological farming and he has been actively aiding farmers, governments and being part of development programs around the world for decades. We need to produce food for 9-10 bn people and we need to do it sustainably.

The final section on ways forward is a bit brief and sweeping in description, although he points to the relation we should have to our earth as the one gardener has to the garden. And the view of nature as something that needs to be respected and honored for its own sake, and not only as something that is instrumental to our needs. We need to move from pioneers to stewards of the earth, we are totally dependent on it and we are part of it. In this new future Rundgren sketches thoughts on the relation between work and leisure time, global and local solutions, the role of governmental and non-governmental institutions, energy, technical development, global justice and diversity in species, ideas, cultures and so forth. In the 2½ year later written English version this section is expanded, which is a good idea.

Concluding, if you want to read only one book on sustainability, I warmly recommend this one! This one gives me hope for the future. But we are still facing the biggest challenge in the history of the modern human being.