To which question is Integral the answer? A report from the IEC.

Having arrived home from Budapest and the first Integral European Conference I thought I’d share a few reflections on my experiences. The emphasis here will be on the two sessions I participated and presented in and the keynote that I was mostly interested in.

The focus and emphasis of the conference, as I perceived it, was more on total experience rather than on theory and academia, as well as putting Wilber’s AQAL theory as central rather than following the development of the ITC and broadening to other similar meta-theories and theorists. My impression was that the aim was integration and unity in the community-building rather than differentiation and diversity of ideas.

I submitted two abstracts, one together with Svein Horn on integral perspectives on Peak oil and the other one was a proposal for a workshop on adult development. The first was accepted in the first round and the latter was accepted as an academic presentation instead, which I think was a good choice.

I arrived in Budapest and to the IEC with slightly mixed feelings. Perhaps it’s part of my cultural secular heritage to be skeptical or at least sensitive towards any forms of movements and community building, especially with an integrated spiritual dimension. Although I have previously seen myself more as being part of it. But the stronger the shared identity, the harder it is to scrutinize, criticize and to transform if necessary. The tighter you hold a community with a shared set of values, ever so evolved, the more it will exclude people and the more it will stagnate in the long run.

After some keynotes it was time for the first session. Each session contained several presenters that talked about roughly the same theme, and one of the presenters had also been chosen to facilitate the session as a whole. My first session was on adult development, one where I was both presenting and facilitating. Chairing or facilitating a session and at the same time presenting is not optimal and some other uncertainties around the content and forms of discussion added to the stress. Our session drew a large audience, the room was packed with about 50 persons, some sitting on the floor. I suspect that Susanne Cook-Greuter added some star quality and of course the topic of exploring the highest stages of development likely had some allure, despite our focus on a critical discussion and on problematizing.

My presentation had the theme of differentiation and stepping out of embeddedness, e.g. of an integral meaning-making, and on introducing MHC. The last half-hour we formed a big circle in the room and shared our thoughts on development vs crisis, development vs suffering, enlightenment vs psychosis and so forth. The topic was quite heavy and when we did a final round of formulating wisdom questions to bring with us, the last one: “How do we not forget to have fun in the process?” was relieving and could bring us back to a more playful mode.

The conference schedule contained several organized and facilitated group processes, but I preferred the evening activities that allowed for more spontaneous socializing, such as the boat party and the gulash party, where I made the following recording that I could use for next day’s presentation on energy as an illustration of how the first energy revolution, the domestication of fire, has shaped us:

The following morning Suanne Cook-Greuter gave her keynote speech titled “On being human” that addressed problems, concerns and beauty of a more universal human nature rather than specific for high stages or integral. Interestingly, she mentioned the new “Superhuman potential” marketing campaign as a good example of how one should not relate to or promote development. And among other things, I noted that she has good taste in art (using the same piece of art that use as a header image for this website). 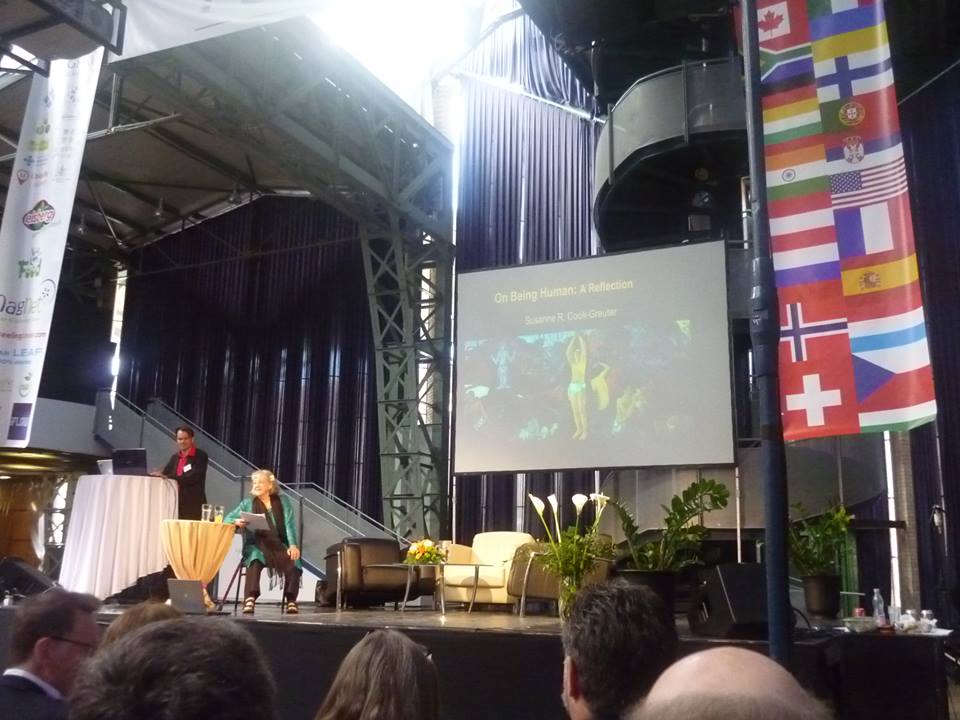 To me Gauguin’s painting Where Do We Come From? Who Are We? Where Are We Going? represents humanity’s quest for meaning and is formulated as three questions. In relation to this Integral can be seen as an answer that addresses those very questions. Or in Wilber’s words:

“to explain why dirt would get right up and eventually start writing poetry.”

To which his answer became integral theory or AQAL. After the forming of Integral Institute, Integral became more of a movement and the answer AQAL started to look for new questions, such as what economy, education, politics, psychology, medicine should look like or how various theories should be organized, or even as a theory of everything and also as foundation of meaning-making.

When Svein and I worked on our paper we had as our primary aim to introduce Peak oil to an integral audience using integral perspectives. But when we took a broader energy perspective we concluded that AQAL was an insufficient answer even to the original question on dirt writing poetry. The sun gets far too little credit for this process! And we can also say that the future does not look quite as bright with this energy and collapse perspective introduced, to say the least.

The audience for my presentation and the ecology/sustainability session as a whole, was significantly smaller than the adult development session, but it rendered interesting discussions afterwards and also during the evening.

The following morning I was approached by “Jack Wolfskin” who had participated in the ecology/sustainability session and he thanked me for my presentation and for our work on the energy issues, which he thought was important. However, he said that it had been a bit hard for him to follow and get all the information. I agreed that I may have packed one or two diagrams too many in it and that the scope of the work ranging from history/anthropology, engineering to philosophical aspects of human development did not easily allow itself to be introduced in 20 minutes, although I personally felt quite pleased with my presentation and the feedback I got.

But no, although I had given a very enthusiastic impression, I hadn’t really connected with the audience to make sure that they followed and received my message. My eyes had been directed more above rather than having direct contact with the audience, he claimed. After a few moments reflection I agreed that there might have been some fear involved in presenting something that I thought would be controversial in this context.

– But now we connect, he said.

Beyond what can be achieved by means of strategies and practices, a shared set of values or life purpose, and beyond politeness and psychological defenses, we were just two human beings meeting. We met in a long embrace and a space that allowed me to admit to myself that it had been quite a stress for me. Although I had many interesting, stimulating and enriching discussions and meetings during the conference, this was my most intimate one.

But what was there to fear? Perhaps fear of being rejected by a community!? But mostly I think I feared that someone would react the way I did when I first discovered these perspectives five years ago – my world fell apart.

It was a relief to find that there were several participants that welcomed these new perspectives. And it was also a pleasant surprise that we received official recognition by being awarded Best academic paper!

Svein and I are grateful for this recognition and I would like to personally thank the organizers for all their hard work in creating and hosting this conference!

Edit: One of the main organizers, Dennis Wittrock, wrote in his report from the IEC the following on our award:
“Our Academic Advisory Board consisted of Prof. Marzanna Kielar and Dr. Aneta Gop from Warsaw, Poland. Of all of the academic papers we had received two stood out in particular. We awarded the authors Kristian Stålne (Sweden) and Svein Horn (Norway) for their paper “An Integral Perspective on Peak Oil and an Energy Perspective on Integral Theory” because of the quality of constructive criticism it brings to the field. The second academic paper award went to Simon Sirch from Germany for his paper “Extreme Sports: An Integral View and Quest for Applications” for his novel and thorough integral approach in the field of sports.”